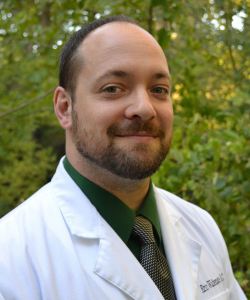 A native of Southern Illinois, Dr. Waltemate attended undergraduate school at Southwestern Illinois College and Southern Illinois University at Carbondale. He received his training in Chiropractic from Logan College in Chesterfield, MO where he was on the Dean’s List and received his Bachelor of Science and Doctor of Chiropractic degrees. He graduated from Logan College in 2002, passed all four parts of the National Board Examination and also passed the physical therapy portion. He went into private practice and established a reputation for correcting spinal misalignments, including scoliosis.
Dr. Waltemate received his first acupuncture certification from Logan College in 2004 and his second in 2005. Also, in 2005, he received a diploma from The Institute of Classical Five-Element Acupuncture in Santa Monica, CA. He also completed a preceptorship with Marcy Goldstein, M.D. who was trained by the famous master of the lineage, Dr. J.R. Worsley.
In 2008, he took a break from private practice and worked in the operating room as an intraoperative neurophysiological monitor. Missing the patient interaction, he stopped monitoring surgeries at the various hospitals throughout the Midwest and decided to go back to private practice with a focus on acupuncture and oriental medicine.
Currently, he practices at Centerco in room 112, where he specializes in treating pain, gastrointestinal problems, and women’s health. Dr. Waltemate is passionate about treating illnesses with natural remedies. Growing up, Dr. Waltemate has always had a love for Chinese culture. When he was a child, he learned how to read, write, and speak the language from a family that owned a local Chinese restaurant in his hometown. This has influenced his career path greatly. Dr. Waltemate enjoys patient interaction most in his practice and decided to focus mainly on acupuncture and oriental medicine. You can learn more about his services and acupuncture here.
Dr. Waltemate has been married since 2001 and has 7 children.